The Project Baseline Comparison (Estimates vs. Actuals) Report shows a side-by-side comparison of the estimates, costs and other variables between the actual project and baseline at a certain point in time. This report allows you to identify which aspects have affected the actual costs of a current project as compared to a selected baseline.

Project baselines can be created on the project record (e.g. Jenn’s Roof) under the Tasks tab. Click on the blue “Baseline” button above the gantt chart to create a new baseline.

*If you don't explicitly create a baseline, one will be created for you automatically when you generate an initial estimate.

Click on the green New Baseline button at the upper right side of the widget to create a new baseline. In this example, we already have an existing baseline named “Estimate No. 2378” which is set as primary which indicates that this is your original estimate.

Now let’s create a new baseline. Input a name for your new baseline (e.g. Jenn New Baseline), then click “Create a Baseline” on the window.

Note: You can create as many baselines as you want to compare against your new project costs.

As soon as you’ve created a new baseline, updating pricing, estimated effort hours, changes to cost, will now be recorded and reflect the difference from the selected baseline.

In this example, we have updated this subtask with an increase in the material cost from $8000 to $9000. We also changed the effort hours, and estimated start and finish dates and times for this subtask. Save & Close to apply the changes. 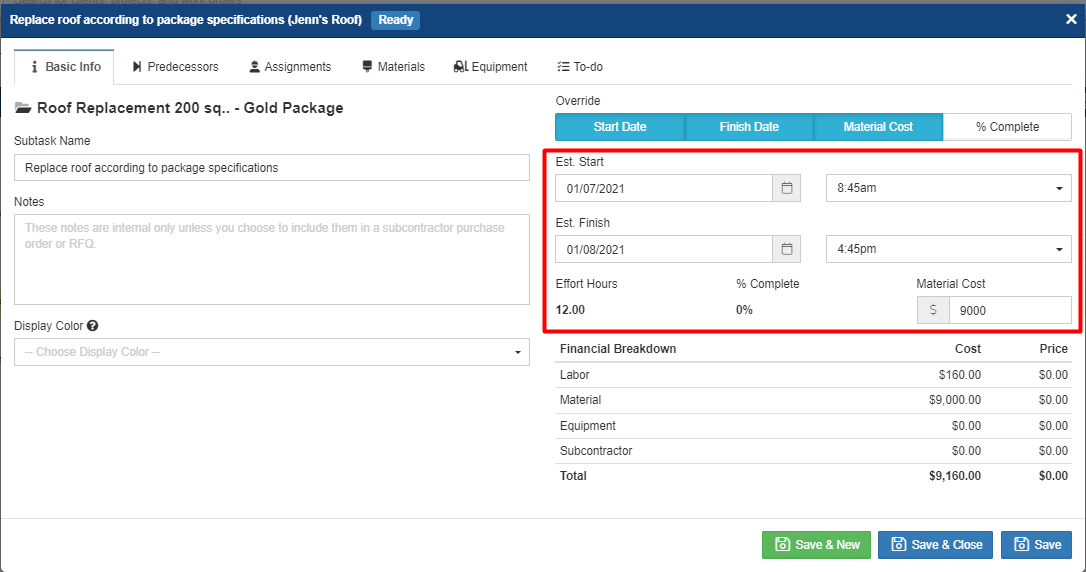 Go to Reports in the main navigation, then select Project Baseline Comparison (Estimates vs. Actuals) on the drop down field. Here are the descriptions of the two fields as shown below:

Choose from projects with baselines: This field will show projects that are created with baselines. A project will not appear in the drop down if it doesn’t have a baseline.

Choose a baseline to compare: This field will show the baselines you created for the project at different points in time. As you can see, we have two baselines for this project.

In this example, we have run a project baseline comparison report for Jenn’s Roof project with Jenn’s New Baseline. Notice that there are sections highlighted in green and red on the current project. Items highlighted in green indicate a favorable result against the baseline, while items in red imply unfavorable.

See the data breakdown of this report under the summary of the variables as shown below.